The connection between the tv and computer is all set and ready to take screenshots.  I guess I’m ready to begin too. Here goes nothing… 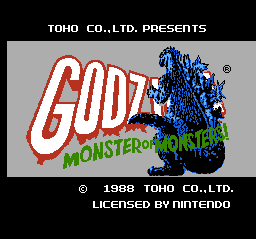 Okay, the opening screen looks the same. If this is like Zach’s game there won’t be anything noticeable until the first boss fight, but I’m gonna be disappointed if this whole game ends up playing normally. 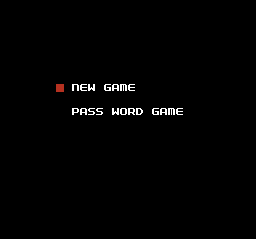 Only a few seconds in and already something’s off. I almost didn’t notice, but the “Last Game” option is gone.  I don’t know why, as usually it would have done the same thing as “New Game”.

Oh god, I really hope this doesn’t mean that I can’t save.  I don’t want to have to play this entire game in one sitting.

Maybe the world titles will work as passwords or something. No way to know until I start playing. 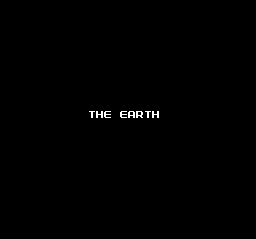 It skipped the Solar System Intro entirely. That’s a shame, I like hearing that music. 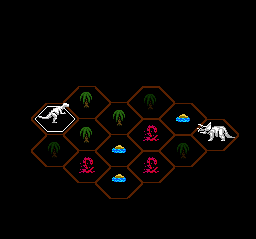 …What the? What is this? This isn’t what the Earth board is supposed to look like. And I don’t have Godzilla or Mothra? 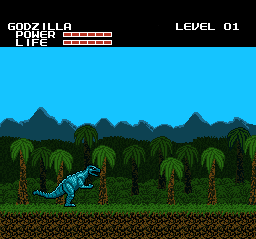 Looks like I don’t have to worry about not seeing anything new. Nothing in that above screenshot was in the original game, besides the life meter. I don’t think any of it was in Zachary’s playthrough either. The only other thing that seems to have remained the same is the music.

My lone playable character is this dinosaur. Since the meter refers to it as GODZILLA, I assume this is him prior to getting mutated.  So no heat beam (yet). It can only attack by punching and biting. 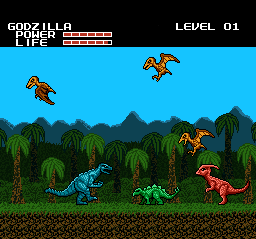 There isn’t much in this jungle aside from other dinosaurs. The pterodactyls divebomb me when I get close, most of the others either attack or run away. Sometimes when I kill one of these I get a health power-up, (which looks the same as the original).  It’s a short level, I got to the end in less than 2 minutes. I’ll try the blue and yellow icon next. 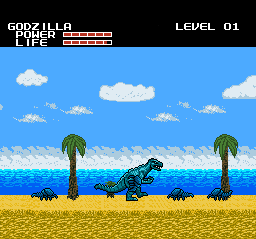 This level is a beach, as you can see. Those little crabs are a pain, they jump and latch on while draining health. But they don’t take much punishment and give health when they die, so it balances out. Only problem is that they’re everywhere in this level. I try to jump over them when I can. 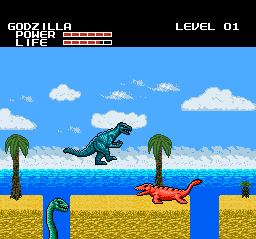 In the second half of the level, there’s less of the crabs and more of these aquatic dinosaur/fish enemies that emerge from pits. I’ve played quite a few platformers in my day, so this is nothing difficult. It isn’t scary either, but it’s giving me a weird feeling. It’s hard to explain. It’s like if I hadn’t tried out the real game before, I might not have known anything was out of place.

For a “supernatural game”, so far it’s just playing like a normal game. But not the game that it should be. None of these dinosaurs or levels are supposed to be here, and I have no idea where they came from. 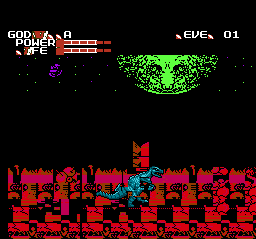 This 3rd level is very glitched. No enemies at all, and my Godzilla dinosaur is flashing and his body parts are rearranging themselves with every step. The music is similarly distorted, it’s slowed down and has a lower pitch. 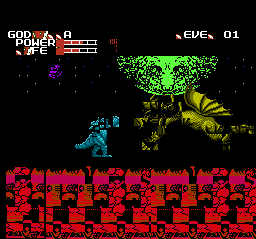 I was going through the level, trying to figure what went wrong with it, when I suddenly got attacked by a very glitched Ghidorah! I almost freaked out because there was no way I would win a fight against Ghidorah like this. But then the game froze and made a loud buzzing sound, then it returned to the board like nothing happened. Weird. 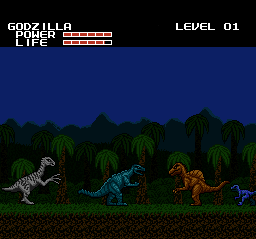 The last level type is another jungle. It has the same graphics, but this time its set at night. The dinosaurs here are different, and a lot more aggressive. They come from the left and the right sides of the screen, so I have to pay attention to both.

I’m attacking the small dinosaurs for the power-up and avoiding the rest, because I’m fairly certain the triceratops at the end of the board is a boss fight. I don’t know what to expect from it, but I don’t want to be low on health. 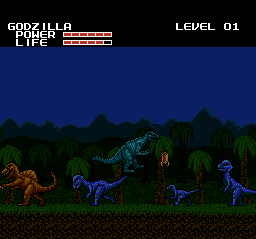 The level is longer than the others, and I notice a strange kind of teamwork occurring with the enemies. The blue raptors will follow my dinosaur around and keep jumping at him, knocking me back into the path of the larger dinosaurs.

There’s another large dinosaur of the same color that does a similar thing, charging at me and inflicting damage until I either get away or kill them. It’s like these dinosaurs hate me for some reason! 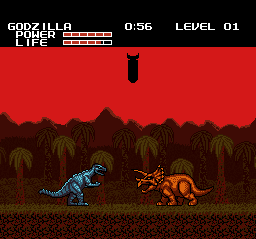 Here I am at the boss fight. There’s a nuke going down in the background, and the battle is timed at 1 minute. This must be the decisive hour when the dinosaur becomes Godzilla. I guess this triceratops must be the strongest animal on the island, a rival. Better take him down now, or else a very different King of The Monsters will arise.

He doesn’t have much attack variety, he seems to be limited to charging. I jump when he does it and then assault him with everything I got (which isn’t much).

He went down with only 4 seconds to go. No time to outrun the bomb, but it seems I wasn’t supposed to. A “cutscene” starts to play: 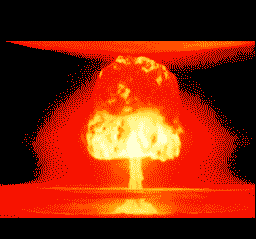 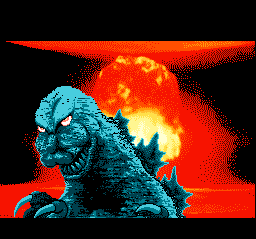 When it ends, the game goes back to the Game Select menu. “New Game” has been replaced by “Continue”. 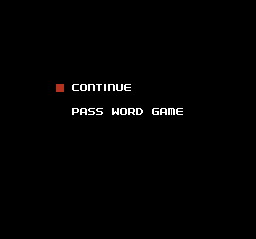 And that’s World 1. For my first impression…. I’m not sure what to say. I feel a bit overwhelmed. Where did all of this come from? And why?