Hello everyone. My name is Carl, and I have just obtained a game with quite a story behind it. Maybe you’ve already heard about Zach and his NES Godzilla cartridge? I wasn’t aware of it until I saw the eBay auction, and it really grabbed my interest.

I skimmed through the recounting of what the game supposedly did. I wasn’t sure what to make of it, but something about the whole thing just captivated me, and I decided to buy the game. I thought if nothing else, I’d get a new game and a nice conversation piece. I used Buy-it-now and got it for a decent price, $10 including shipping.

Zach sent me an e-mail and we talked for a bit. He seems like a decent guy despite being a bit loopy and dramatic. He made it clear that he was dead serious about the game being unnatural and dangerous. I still wasn’t entirely convinced, but I played along.

About myself and the game: I actually never played NES Godzilla, at least not with the actual cartridge. After I won the bid I played the game on an emulator a bit to see what it was like, and also so I could point out noticeable differences (if there were any) later on. The first 2 worlds were decent fun, but it got boring pretty quick.

I’m not a Godzilla expert. I liked watching the movies when I was a little kid, but that was a long time ago. I hardly remember any of the monsters except for the really famous ones like Rodan and Mothra. So if the game starts throwing a bunch of obscure Godzilla related stuff at me, I might not catch it.

And here is the game cartridge itself: 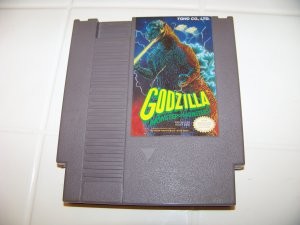 There’s nothing visibly wrong with it, no weird marks or anything that would make it stand out. If it got misplaced and sorted in with some regular games, you’d never know the difference.

I haven’t actually started playing the game yet. I’m still in the process of hooking up the tv to the computer so I can take screencaps in the event that things get interesting. For now, here’s a photo I took of the title screen starting up: 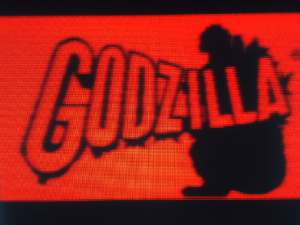